How to maintain InfoPath Form Changes or Versions

Recently, I too faced a challenge, posted the problem in MSDN forum, but didn't get any solution and then came up with "workaround" to resolve the matter. Considering this could be one of the cases which peple often encounter, I thought of detailing the information in this post.

Scenario:
1. Version: SharePoint 2010 and InfoPath 2010.
2. Design an InfoPath form (browser based) and publish it as Farm administrator approved template.
3. Activate this form in a site collection.
4. Add the above form as content type in a document library.
5. Now, it is available for user to fill up the form and save.
----At this point, user has saved the form----
6. There is a change request for InfoPath form, so go ahead and change the design.
7. Publish again as before.
8. Notice that, user filled form (step 5) is reflecting the changes.

This behavior could pose a problem when user filled forms get into approval channel and are used in an Audit. Any changes to the form which is already approved is sometimes not acceptable to the users.

Now, the question is how do we avoid existing forms getting affected from future changes.

Options Explored:
1. Open the form in InfoPath Designer.
2. Navigate to File -> Form Options -> Versioning.
3. If you observe here, there are two options to set.
3a. Update Template, which I set it to Let form users decide when to update.
3b. Update existing forms, which I set it to Do Nothing. 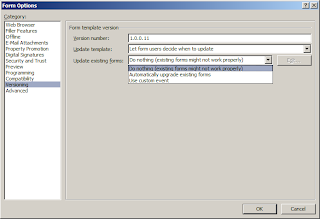 Unfortunately, none of these settings had any impact on the existing form. I wonder if these settings apply only to Offline Forms (which I did not test though as in my case it was browser based form).

Another option tried was setting Update existing forms to "Use custom event". Idea was to cancel Version Upgrade event. But this option also had no effect on the existing form.

Solution (Workaround):
1. Open the form in InfoPath Designer.
2. Place a text box control on the default view of the form.
3. Call this text box as txtVersion, set the default value to 1, and make it hidden by applying a formatting rule.

Next time when there is a change requirement,
4. Open the form in InfoPath Designer.
5. Create a replica of the default view into another view (call it V2).
6. Go to default view, set value of txtVersion to 2.
7. Create a rule in form load such that if txtVersion = 2, switch to view V2.
8. Publish the form (Ensure the version settings are set as described above under points 3a and 3b).

Note: Yes, this might not be the efficient way of implementing it, but considering other options are not working, this solution would suffice the need. However, this solution becomes more complicated if the InfoPath form itself requires multiple views for users. Also, if the changes are frequent, the above method unnecessarily increase the content of the form and might become performance issue. So, this approach should be considered after weighing the requirement and needs and taking into consideration other factors.

If you have any other approach to resolve, would love to hear that. Please do leave a comment.

Popular posts from this blog

May 14, 2016
Person or Group field in SharePoint is similar to a Lookup field. When you are updating this field using REST API, you need to append "Id" to the name of the column in the body construct. For example, the body construct looks like this: data: { "__metadata": { "type": "SP.Data. ListName ListItem" }, "Title": "First Item", " PeopleField Id": "4" }; The highlighted portions should be replaced by the actual List Name and Column Name. In the above example, the REST call is updating a List item with Title and People columns. How to get the value for user ID ("4" in the above example) needs a separate explanation and that will be my next post! The above example works fine if Person field is configured to accept only one value. If we change the Person field to accept multiple values, how do we pass more than one value in the REST call? Since we normally separate user names with semicolon in peop
10 comments
Read more

June 07, 2014
Sometimes, there are out of the box features which we tend to ignore and later when we do apply, we are more than happy about the feature which is readily available in SharePoint. One such feature is List View Style. I never thought I would write a post on this. However, whenever I spoke about this with users, people were excited to see the result. That prompted me to write this post. Instead of getting into only theory part, I will basically take use cases where these styles can be applied and also touch up on on some minor limitations with certain style. When you are creating/modifying a List view, you will get an option to select View Style. As shown below, there are 8 options available and Default is always set if you ignore this style. List of View Styles I will take typical Contact List and Announcement List to explian about these styles. Let us go one by one. Default: This view, as name suggest, is the default style in a view. This is one of the widely seen style
1 comment
Read more

How to get SharePoint List or Library GUID via REST

October 07, 2017
Sometimes, you would need List or Library GUID to use that in some operation. In such cases, how do you get hold of GUID using REST API? There is a straight-forward end point which you can use: /_api/web/lists/getByTitle('ListTitle')/Id This will return the GUID of a List or Library. There is also another approach. However this approach works only if a List or Library contains at least one item. /_api/web/lists/getByTitle('ListTitle')/items This is a familiar end point which we use to fetch items of a List or Library. To get the GUID from the response, you would do: var listIDTemp = response.data.d.results[0].__metadata.id; var listID = listIDTemp.substring(listIDTemp.lastIndexOf("guid") + 5).split('\'')[0]; As you can see, we are doing string operations to fetch GUID from metadata.id. This contains information only if the response has at least one item.
Post a Comment
Read more